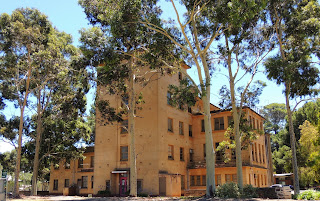 I recently wrote an article on Weekend Notes about Eastwood Lodge, the former Nurse's Home in Glenside Hospital.

The building has some interesting features, and when the government proposed to demolish it, there were protests from a number of groups including the National Trust of SA. The building was nominated for inclusion on the State Heritage Register

I won't repeat what I wrote in the article - it is worth reading in its own right.

Suffice it to say that towards the end I crititcised the SA Department of Health for getting themselves into a financial mess.

Other criticism was directed (again) at the SA Minister for Conservation Paul Caica. He used his powers under the state Heritage Places Act to remove Eastwood Lodge from the Heritage Register in the public interest. The State Heritage Council had added it temporarily while investigating the building's merits.

In my view the Minister was totally wrong to blithely claim that it is in the public interest to prevent an independent assessment of the building's importance.

While the article received praise from some readers, two readers wrote comments complaining that I had introduced politics into an entertaining site about what's on in Adelaide.

While it was OK for me to write about a building at risk, it seems it's not OK to comment about the reasons why.

To me that would be a little like writing about the Twin Towers without mentioning Al Quaida or Osama Bin Laden.

One of my drivers for writing is to bring things to people's notice. Good things. Scary things. Funny things. Wrong things.

It certainly is not the first time that a comment about government or politicians has slipped into one of my articles. And I expect it won't be the last, if such comment is called for.

What do you think? Should an author be able to express their own opinion in an article on Weekend Notes?

Opinions are presumably expected for film or restaurant reviews, or an article about an activity such as a course, or a tour.

Why not comment about the reasons for demolition of an iconic building?